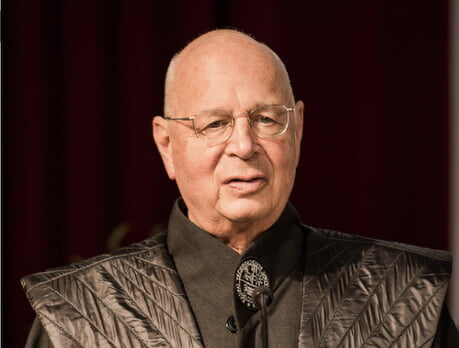 Klaus Schwaub is one of the Cultural Marxists that that propagate and severe decrease in population, prohibit property ownership and create something similar to the hells-capes described in the books 1984 “Brave New Word”.

Reminder to any sane person: The book 1984 by George Orwell was NOT intended and a instructions maknual.

AwakenWithJP: My special guest in this exclusive interview today is none other than mr Klaus Schwab, founder and chairman of the world economic forum. Mr Schwab i’ve been a big fan of your work for a while now so I’m very pleased to have this opportunity to be talking with you.

AwakenWithJP: Thanks bro I’m honoured that you’re honoured now you’re someone who no one in their right mind would ever let babies sit their children yet trusting you to shape the future of humanity is something I think we’re all on board with and your work is incredibly altruistic so what is it that you see that the world needs that you’re trying to provide.

Schwab: I see the need for a great reset

AwakenWithJP: Klaus you’re just being modest I think it’ll be a tremendous reset it’s a big service to humanity as such is there a dilemma about the great reset that keeps you up at night?

Schwab: How can we do it to make sure that a majority of people are benefiting from it and not just a minority.

AwakenWithJP: Well i think if there’s a person that the common people rely on to stand up for them against the agenda of the elites it’s you Klaus Schwab tell me about your connection to the deep state.

Schwab: Intrinsically connected to one another (inaudible)

AwakenWithJP: I don’t think you just said actual words but I like your confidence and I notice your eyes look like they’re almost closed because your shitty face is so droopy and some people with what’s called evidence have suggested that you’ve orchestrated how you say the global pandemic and they don’t like it how do you feel about your orchestration of this?

Schwab: What I’m maybe most proud of in my life.

Schwab: We know the health industries the digital industry will go out of this crisis strengthened.

AwakenWithJP: What a weird coincidence that the industries you control have profited so much huh well I’m wondering and just to give you context some of the historic greats have had quotes that people always think of when they hear their names like Jesus do unto others as you’d have done to yourself the buddha this too shall pass Gandhi be the change you wish to see in the world and with you by you’ll own nothing and be happy about it very inspirational i might add what’s your motive behind such profound words?

Schwab: this is an opportunity again to find solutions uh which are beneficial for the next generation

AwakenWithJP: I do see how only nothing would be very beneficial to the next generation it’s kind of like mandatory poverty well not for you but for them kind of takes the stress out of wondering will I be successful or not and I like that but how do you think the next generation will feel about it?

Schwab: so um we have to prepare for a more angry world.

AwakenWithJP: Yeah sounds like they’ll love it moving along you’ve advocated for a global digital health pass what does that mean?

Schwab: we provide everybody with decent access to the health system.

AwakenWithJP: My notes say you’ve never been elected to be in charge of the health care system nor have you been elected to be in charge of everyone for that matter um must be a typo on my end guys could we get this corrected sorry about that sir it’s very embarrassing let’s just move on now Klaus Schwab you’ve said to never let a good crisis go to waste and you’ve definitely capitalized on your covert crisis do you have plans for another crisis perhaps an even bigger one?

Schwab: The environmental crisis the climate crisis could be a much bigger one.

Schwab: however we do know that global energy systems food systems and supply chains will be deeply affected.

AwakenWithJP: There are no coincidences are there Klaus Schwab and I wonder who will affect these things and why you know so far in advance that they’ll be affected what do you know about adrenochrome?

Schwab: The way I saw it young people was the most important

Schwab: So many young people really in key positions.

AwakenWithJP: Ah gross to be honest with you I don’t really approve but it’s probably just a cultural difference between humans and reptiles. schwabski your narrative says a lot about helping people and bettering their lives while those who believe in the conspiracy theory called reality see your actions as ones that hurt people and make their lives worse.

Schwab: And i think we shouldn’t see the two as contradictory objectives

AwakenWithJP: Good point I see a square peg fits perfectly in the round hole accordingly you’ve talked before about genetically editing the population and your top advisor dr Voah Hirari has talked about you elites building digital dictatorships by hacking humans and re-engineering life for those at home let’s take a

Schwab: Look the difference of this first industrial revolution is it doesn’t change what you are doing it changes you if you take a genetic editing
data might enable human elites to do something even more radical than just build digital dictatorships by hacking organisms elites may gain the power to re-engineer the future of life itself but soon at least some corporations and governments will be able to systematically hack all the people so Klaus Schwab given what you and your advisor have said how do you feel about controlling every person on the planet I'm so happy dude that's pretty heavy enslaving humanity I bet you were never held as a child not even once but here's what I'm wondering if enslaving humanity is your goal you can't just tell them what you're doing or else they wouldn't take your injections and use your digital ids you'd have to call it something else to disguise it something benign or even inspiring so do you have an alias for what you call your human enslavement project it's a force industry revolution that's a great name for it it sounds progressive I'm on board let's dive deeper because I like where we're going here so to control people you'd have to get them to depend on you and all the governments that you control and we all know that the only way for the few to control the many is with fear and I know you're big on helping people by fear-mongering about your climate crisis so how do you see all that fitting together.

Schwab: Why not to tie government aid to the green economy which we have to create?

AwakenWithJP: Oh a social credit score that sounds super sweet but to your question why not tie government aid to the green economy which we have to create that’s a great question and i’m happy to share first creating a society where people have to rely on government aid is called communism and people with a soul see that as evil and it’s caused horror and suffering of the time it’s been implemented throughout history and I think your green economy vision is just a virtuous sounding scheme to manipulate people with fear into being controllable rather than you having genuine concern for potential planetary changes due to carbon emissions so when you look at it that way that’s why not to tie government aid to the green economy that we don’t have to create that’s a good looking shirt by the way.

Schwab: In times of crisis the role of governments is more important and more relevant than ever.

Well not if it’s the government’s causing the crisis in order to form a one-world government but oh who’s your all-time favorite government leader you’re colluding with in order to cause times of crisis?

he is excellent isn’t he I love all the genocide he’s doing this has been a beautiful interview but before we end it’s time for the lightning round Klaus Schwab if you were a kitchen appliance what would you be?

Schwab: I, I think

Schwab: for governments shaping the future

you are a communist that’s awesome well Klaus Schwab thank you for taking the time to sit down and open up in such a beautiful vulnerable honest way. i’m walking away feeling inspired to be more obedient surrender my free will and I even feel more terror. Thank you Klaus Schwab I hope you have a great reset, I’m off, now i’ve got some reading to do