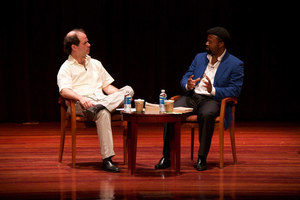 An allegory of history: Novelist Ben Okri was awarded the Booker Prize in 1991 for The Famished Road. In 2001 he was awarded an OBE. Here, we post the famous: “The mysterious anxiety of them and us“.

We had gone visiting friends on a dreamy day of rich sunlight. We were at table outside. My wife was sitting next to me. The host had served up a feast. It was on the table. There were many of us. Some were already seated. Some were standing behind those seated. In a way there were too many of us for the food served. Or it felt like that. For a moment it seemed there would be chaos. It seemed that everyone would rush at the food and it would all be spilt and we’d have to be a bit barbaric and eat with our hands, fighting and squabbling for the feast laid out on the lovely trestle table. This moment of tension lasted a long while.

No-one was sure what to do. Insurrection brooded in the wind. The host did nothing, said nothing. Then something interesting happened. It appeared that those who found themselves at table were the ones at table. Those who were at table ate. We just began eating. We served ourselves, and we ate, and ate. We ate calmly. The food was wonderful. We ate with some awareness of those behind us, who were not eating, and did not move. They merely watched us eating. Did we who were eating feel guilty? It was a complex feeling. There was no way of resolving it as such. Those who were at table ate. That’s it. That’s all.

We ate a while. Then the people behind us began to murmur. One of them said, in a low voice: “The first person who offers us some food I’d give…” I was tempted to stop and offer them some food. But how could I? Where would I start? The situation was impossible. If you turned around, you’d see them all. Then your situation would be polarized. It would be you and them. But it was never that way to begin with. Just that you found yourself at table, and you began to eat. They weren’t at table, and they didn’t eat. They did nothing. They didn’t even come over, take a plate, and serve themselves. No-one told them to just stand there watching us eat. They did it to themselves. So to turn round and offer them food would automatically see them and treat them as inferior. When in fact they behaved in a manner that made things as they turned out.

And so we ate on, and ignored the murmurs. Then we found that we had finished eating. We were satisfied. The host got up and led the way to other parts of the grounds, for a post-prandial stroll. There was still some food left. Enough, it turned out.

My wife and I were almost the last to leave the table, because we sat on the long bench backing those that were standing. As we got up, and were leaving, I looked behind us. I saw there were only three people there. Two men and a woman. Was that all? They had seemed like more. Also they were further back than one had felt at first. They were close to the wall, almost leaning against it. One of them looked like someone a little famous, from a privileged race. Maybe there had been more of them, but they had drifted off, gone away. While we had been eating it often occurred to me that there was nothing to stop those behind us, who weren’t eating, from sticking knives into our backs. Anyway, I looked, and saw the three. They were talking among themselves. Had they got used to the fact that they weren’t eating, or would they settle for what we had left behind? I didn’t know. My wife and I filed out with the others, towards the garden, in the sumptuous grounds of the country estate.

Ben Okri
Novelist Ben Okri was awarded the Booker Prize in 1991 for The Famished Road. In 2001 he was awarded an OBE or the “the mysterious anxiety of them and us”.